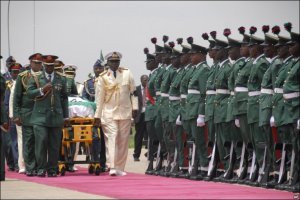 Called from the BBC
Sad and untimely, the death of President Umaru Yar’Adua, at 58, nevertheless brings to an end a period of profound uncertainty in Nigeria. Mr Yar’Adua’s ill health overshadowed his presidency from the outset in 2007, hampering his ability to push through reform and counter powerful interest groups resisting change.

More recently, as he became incapacitated, the refusal of his entourage to allow a smooth succession brought Nigeria – whence one in five black Africans hail – to the brink of constitutional crisis. Called from F.T.Com

May his Soul Rest in Peace