President Paul Biya of Cameroon and wife Chantal Biya left Cameroon February 4, 2011 in one of their numerous private visits to Europe. Although the visit is announced by the Presidency of Cameroun to be private, its frequency is not unconnected to the President’s health problems which has been on the balance for some time now.

Why the Cameroon constitution gives a blanket of what it calls rights and freedoms engrafted in its self-styled 1990 laws, its constitution still falls short in making its preamble that has been windowed dressed with United Nations Human Rights instruments anything enforceable. As Egyptians enter the 13 day of uncertainty regarding the future of their country and with president Mubarak given a blanket cheque to quit, Cameroonian especially those in the diaspora take stock in an attempt to show case its inability in taking advantage of a new age for change championed by social network twitter and facebook.

President Paul Biya has tactically engaged the SDF and John Fru Ndi in anticipation and preparation to water down any Anglophone uprising and as a show case to the Afrtican Commission on Human and Peoples Rights visit to Cameroon. With two cases pending at the ACHPR in Banjul on the Southern Cameroons and the Bakweri land issues, Biya who had acknowledged of being the best student of  Francois Metterrand of France has managed to manipulate the Cameroon political system so far. 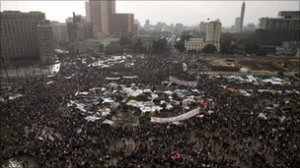 However, if Egypt and Tunisia having sent Ivory Coast and the elections in Southern Sudan into the dust bin is any lesson to be learnt, then a popular uprising against imperialism and French grip on African will be a popular upserge than only regime change in Francophone Africa. As Cameroonians are expected to stand up and say no more to Biya’s 28 years dictatorial rule in Cameroon, it should be a double edge sword in ending French political hypocracy and dorminance of Sub-Saharan African for the last  century. Can we do it? “Yes we can”, so lets do it now . Let us come out in a sit in protest and stop President Paul Biya and Wife Chantal Biya from returning to Cameroon. Let us end his 28 years monarchy by flushing him out from power. With our bear hands, we can do it, so lets claim our country from lotters and embezzelers.